It's been a while since I declared, perhaps rather rashly, that my favourite brewery was Shepherd Neame and nary a beer from their stable has made me sit up and shout about them since Dragonfire (link) in June! Indeed, it's been a while since I reviewed anything of them, the last being the rugby themed Up and Under (link) in July. In partial rectification of this, and also to see if they withstand the onslaught of locally brewed beer since I've moved.

Tonight, then, it is the time to have Bishop's Finger and see how we go. Mind how you go, sir, it is a strong ale, sir. And yes, I just said the last sentence in the Cockney accent I remember from things like On the Buses or Up Pompeii. 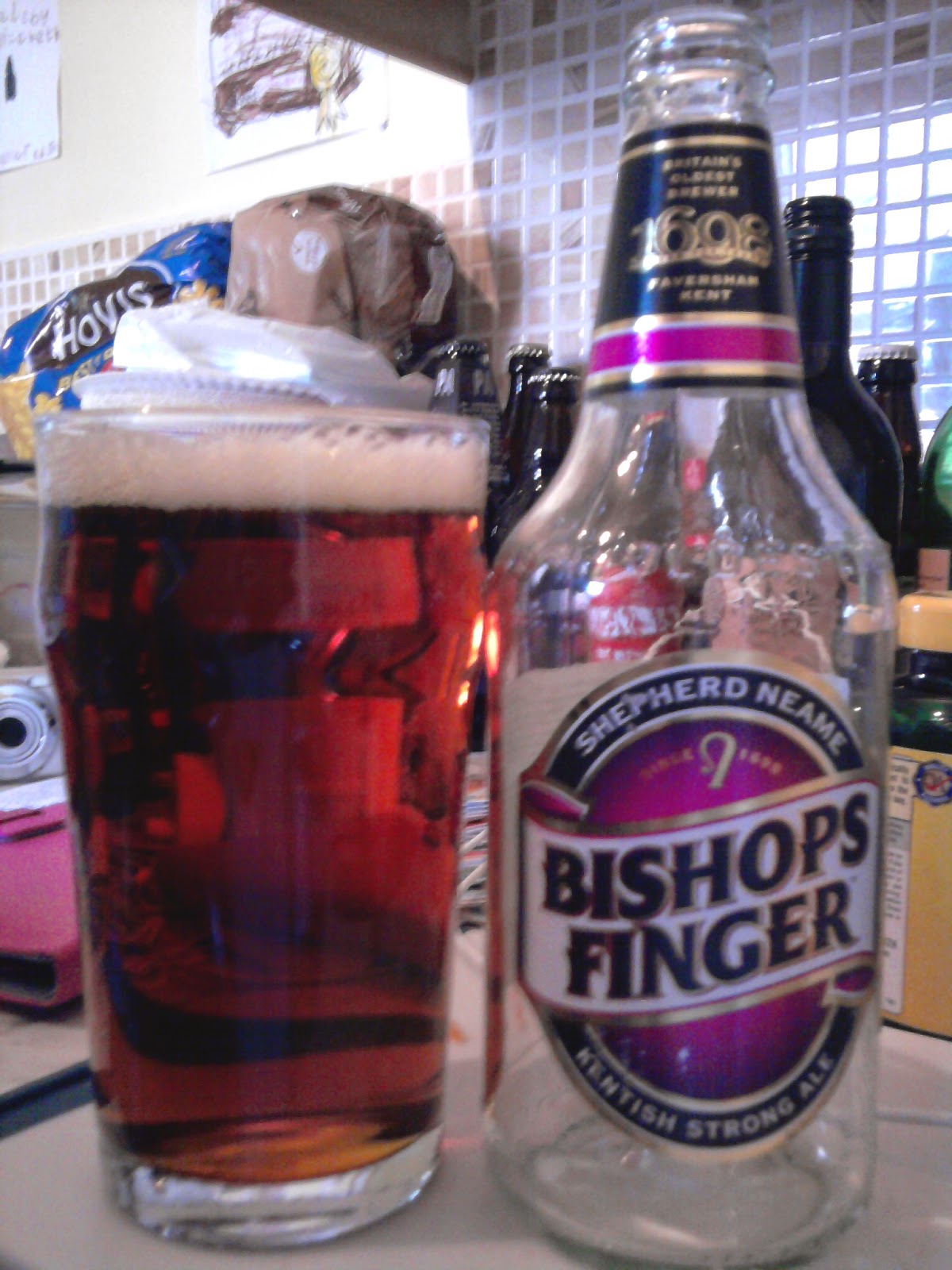 Straight away the aroma begs to be noticed as you open it. This one hadn't been long in the kitchen before being tried and the smell did rather rise above the chilli (quorn-based with rice, really rather nice) I had been re-heating for tea. That aroma was rather dry, there was an element of fruity hops but it was mainly malty and deep, soulful, smelling for all the world like I imagine Greyfriar's Bobby felt sitting on the grave of his master. In short, there was something really rather wistful about it. This, of course, made me check the bottle's label, whereupon I learned that it was first brewed to celebrate the end of austerity after the Second World War in 1958. This explains the richness of the aroma and the fruitiness that it promised.

Pouring produced a proper head to go with the chestnut depth of the colour, and there was little in the way of extra bubbles caused by the act of pouring, which was nice. Sure, one has to wait until the head has calmed some to top up the brew in the glass (not a real pint glass, but a 500ml one from a supermarket), but that just makes you feel like your very own publican. The first taste is very dry, there's a definite hit of yeast and malt in that first wave, settling toward a strong, warm, malt in the middle and then the barest hints of bittering hops as the sip leaves the mouth. Aftertaste is pleasant and with plenty of yeast in there - spicy and satisfying - but doesn't outstay its welcome.

Strangely, the aroma seems to hang around like an old drinking friend, the kind that looks like they will offer you advice as you talk about what ails you but then, upon seeing your countenance, wisely decides to simply let you have your head and listen carefully. It is the face I have seen in many a bar when waxing lyrical about topics as diverse as the Generals in the First World War or the impact of what I now know to be Feminism should be in the modern world (I mean, VAT on sanitary products but not on 'essential' items - what now?). And thus it neither increases, nor becomes unwelcome and slinks away slowly. The colour is a proper ale colour and I rather imagine men and women coming home from demanding labour and using it to relax at the end of a long shift, albeit this through incredibly rose tinted spectacles whilst reading display boards in a local museum keen to show off its industrial past in the most positive light that is possible. At 5.4% ABV, there's no danger of this one going soft, let me tell you!

Despite the time of year for me tasting this offering, I would recommend this as an any-time beer, best coupled with a reading of Three Men in a Boat by Jerome K. Jerome; mayhap echoing his travels by boating on the Thames or else enjoying the relax that it may aid on a sunny day at the height of a holiday in the United Kingdom. Or, rather, whilst trying to avoid the mooning couple, Henry VIII and Anne Boleyn, in the south of England during those summers before the Act of Supremacy. At any rate, a very British ale that deserves a very British setting in which to drink (if abroad, then simply affecting an approximated British accent and listening to the BBC World Service will suffice). Tally ho!