You know what they say about girls and chocolate, right? Well, this was bought for the sole purpose of me seeing what chocolate beer was actually all about (plus it was on offer) and then I hit on the idea of giving it to Willow for Christmas.  Because of, you know, what they say about girls and chocolate. Having done that I, of course, immediately felt left out and bought myself some. We shared the drinking of the beer and compared notes as we went.  It was a wonderful bit of sport and I think I shall try and have this happen more often at home.

I may have ended up with the lion's share.

It is Triple Chocoholic and it is brewed by Saltaire Breweries, which I find doubly amusing because the whole point of Saltaire, when it was built by a philanthropic businessman, was that it would be a place of temperance and order. The mere fact that it has a brewery shows this is a failed aim, but then you could argue the fact that there is any unemployment there did that too. I digress. 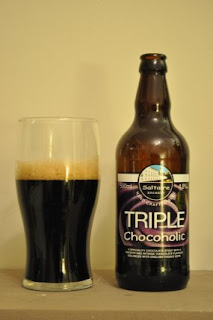 It was Leffe that started this whole ridiculous beer review thing off way back when, so it seems fitting that I should review the other beer in their stable: Leffe Brown. 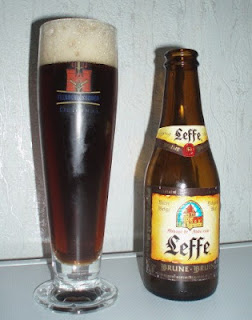 The first thing about this one is the increased weight, at 6.5% ABV it is, in fact, weaker than the Blonde, but the malt in this one is more pronounced with a definite air of treacle about the viscosity and the way it slides down a glass. It remains very European though in how it behaves, it is bubbly and bright despite the dark brown colour of it and the way it caprures the light like a black hole. There is a sparkly aside to the nature of this beer, allowing it to mingle nicely across the dinner table and between courses. The aroma is nice too, there's a hint of Belgium in it and something that speaks of hidden amounts of hops, though I can't be certain on that one. It's not a dancey summer ale or a spring buck ready to pounce but nor is it the heavy tasty malt of Chocoholic.

In essence this is the more understated and mature brother to the latter ale and certainly feels more grown up compared to the Blonde that it shares a stable with. It is a drinker's beer, to be certain, but well used to being used in good company with people who perhaps don't like beer very much. We had ours with a Flemish stew, liberally soaked in the beer itself too, and it accompanied that heavy meal very nicely indeed. Exactly as it should do, it made me feel warmer inside, loosened the tongue a little and got talk going in polite company well. It was, in effect, very European.

Drink this on the colder evenings on the Continent, when the bars are still open and there is frost forming out there in the fields. Sit outside with the friends you just met that day, share a bottle or order a few glasses each, either way, use it to while away a few hours as dusk becomes a velvet night and have long discussions that rove through field, town and philosophy. Allow it to be warm and allow it to breathe. Most of all, enjoy it!

A bit strong for my very weak drink tolerance, but I should have it again in company if not of an evening with a takeaway.

I was eating blackberries we picked from the park back in Summer (yes, we are heatens and we refridgerate those we don't eat or turn into jam) and I was thinking, hmm, I likes me fruit beers, like Fruli and I likes me beer generally.  I know, I shall have a fruity beer.

Cue tonight's ale: Forest Fruits by Wychwood brewery.  It was in a very attractively dark bottle (do I detect a note of red in the glass?) and was attractively priced at the supermarket of choice for picking up nice beers. 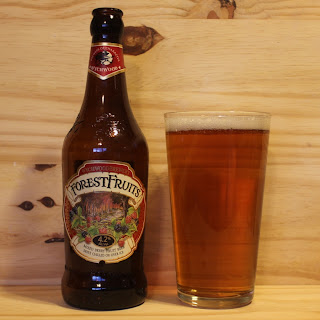 It said it was best served chilled.  I obliged and had it in the fridge for a good long while before opening it.  I almost forgot about it and so it did not accompany a meal or any food, rather coming soon after it into the evening.  This is not necessarily a bad thing, Riggwelter does better this way and Leffe Blonde can have its moments too.  It was a respectable 4.2% ABV too.

But I'm not a fan of this.  Perhaps it has been too long since I had a fruity beer or perhaps I have become too much of a CAMRA styled beardy-ale-drinker or perhaps work is getting to me too much.  I don't know.  There was a definite fruity taste and smell to this.  A sickly-sweet hint of cranberries on the nose and an attempt at blackberries in the taste.  They claim to have added berries to the beer to give it a distinctive taste and maybe they have but they have also added copious amounts of sugar to it.  It obscures what should have been a good tang and some sharp berries.  I like my blackberries slightly sour and I like them picked freshly (I remember eating them in the park back in August with the Boy).  I do not like them when they've been drowned in sweetness and light in some badly made crumble.  It is the crumble that has the sugar in it and the filling that is there to contrast with that, it's the whole point!  Other writers point to the overpowering taste of strawberries, but I'm a great fan of Pegasus strawberries so, being sour, I did not make that association, but they may be right.  Willow tasted strawberries.

As a consequence I couldn't quite bring myself to like this beer.  Willow is more of a fan and I suppose it would have its place.  Drink this with a dessert rather than the main course and drink it after something like Thoroughbred Gold too, it is a dessert beer in all senses of the word.  I can't imagine having more than one in a sitting and I can't imagine having it with anything other than a meal.  Drink last and not to get drunk.

So, it's been a week since the madness of writing that was NaNoWriMo.  What can I now say about the affair apart from the very obvious fact that it stopped my attempt to post here twice every week?  Well, it was an eye-opener. For perhaps the first time in, well, ever, I actually wrote knowing where I was going. I didn't know the details of any given scene when I started but I knew what I wanted to show in it and I aimed to get each scene completed in as few words as possible.

Email ThisBlogThis!Share to TwitterShare to FacebookShare to Pinterest
Labels: blogging, Other

Tonight's offering is Two Hoots from the Joseph Holt brewery in Manchester. They make Maplemoon as well and I'm sure they do some ruby variant of something that I've had in the past. 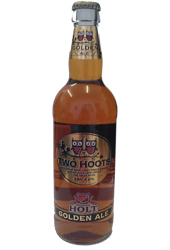