This has been sitting on the shelf in the beer cupboard for nearly a year and, well, it has been sitting there long enough. As the springtime sort of becomes a thing again and the snow begins to recede in terms of threatened falls and the chances of snow-days disappear again for the year it seemed like the time to wake up from hibernation. After spending so much time curled up like some small woodland mammal in the burrow I, like Bill Bailey, have a shock of unruly hair and a need for some coffee. But this is a blog that mainly documents beers rather than coffee and so it comes to pass that I shall be trying some coffee stout. 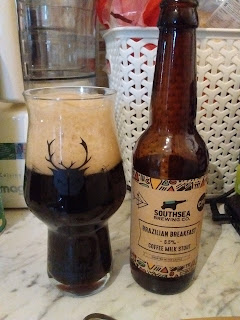 Of course it's a coffee stout. Today I am mostly reviewing the powerful Brazilian Breakfast Coffee Stout from the rather amazing little Southsea Brewery that was picked up for me by my wife nearly a year ago, well, okay, in the summer, but still a while back. Following on from some pretty big names and big hitters lately I'm not sure what to expect but even if it holds its own it will have been a big one!

On opening this one instantly hissed out a big stream of roasted coffee and not a little bit of lactose to hold it all together as the Brownian motion attempted to suffuse the whole kitchen. Not much in the way of activity, as one would expect from a stout, and then it just sat and smelled like something you'd want to dive into. It may seem a little subversive to be pouring something so rich and black and dark on the beginning of spring and maybe it is but I rather like the darkness of the soul that it reflects. The abyss never looked so inviting and peaty, like a bog that would take some dark magic to traverse and would lull the unwary traveller into the depths to drown and never be seen again. A bit like treacle but thinner and warmer, like a black coffee that has been meddled with by Dr Frankenstein to be turned into something truly grotesque but alluring and comforting all the same, singing softly in your ear about the better parts of sleep. 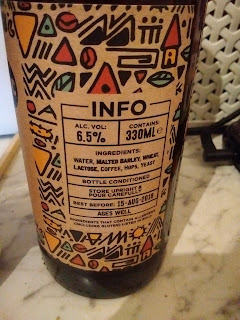 Big head on the pour, meaning that there had to be a follow up and then a second just to get the whole thing into the glass, but already it was doing more than simply being a coffee stout. Sure there was the roast of the beans and the black peat of the stout but there was also a hint of something sweet and savoury that was just on the edge of being recognised and understood. I took a sip, identified the lingering viscosity of something sweet on the lips, the bitterness of the coffee rounded and softened as it mellowed in the mouth and spread out to fill every nook and cranny. It swirled, like the tide, an undertow pulling me down and down to rest safely in the warm embrace of the dark and the deep and then reached the back of the throat. There the lights and omens danced, tantalisingly, and bid me draw nearer and follow them. Then it was down the back and into the stomach, warming all the way with that slight burr and burn of coffee but with that softened edge and slight hint of sweetness that was rich and golden, like lactose added to a particularly light pale ale. It wasn't the 6.5% ABV that was doing the warming and nor was it the coffee that was soft. 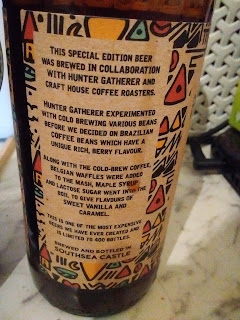 A glance to the bottle and I realised what it was that I was missing: Belgian waffles! Of course! Wait, what? Belgian waffles? Yes, Belgian waffles. Well. It did the trick, certainly, and added that element of breakfast to something that, by rights, ought to have been imbibed on the edge of some dark jungle beset by the encroaching winds of winter, transforming it from the dark brew of some Dark Age traveller's cloak into the harbinger of warmth and spring in a an almost gay breakfast celebration to be had with some priest and all the accouterments of Morris dancing. Unique flavour, claimed the bottle, and it was not joking! This is quite a find and at once I was glad that I had waited so long to open it and have it but saddened that it would now be gone and that I had not got another on standby.

In the event, I gave it to Willow who also pronounced it to be a step up in quality from some of the ales that I had been having (which is no mean feat) and then took another sip. I confess to feeling a little foolish in letting someone else take the taste away but also wary of the fact that stuff like this needs a wider audience. As much as I wanted to transform into a Gollum-like creature and sit in a deep dark cave to have this all to myself there was an element of spring that meant that this has to be shared and treated carefully, and so I did. A sipper, to be sure, no knocking this one back and immediately ordering another, but such a rewarding ale to try. Expensive? I don't doubt it and the ABV is carefully wrapped in layer after layer of dark peaty goodness, cosseted by the big and pouffy gales of coffee so that it arrives fully ready to explode at the right moment.

I was on the Tweets not long after having this and the brewers suggested that they would be doing this again in the future, or something similar. I live a long way from the brewery and I'm not sure how easy it is to get this transported or even ordered online and I would happily make the journey to acquire more of this rather delectable offering. If you are lucky enough to see this, or any of the other offerings from this rather clever little brewery, you would do well to pick them up and have a sample.

Enjoy best after camping out in the foreboding wilderness of winter by the trail, listening to the wolves howl in the distance and worrying that the shape you saw in the night is a polar bear waiting for the cold to claim you and keeping its distance in a parody of the human predatory ability to hunt through exhaustion. Then, as the first summer seeps into the frozen landscape and the thaw takes hold, rejoice with the snowdrops and the crocus and the daffodil, open a bottle of this, pour and drink deep of the nectar contained therein. Let the ABV warm the cold flesh and thaw out the veins and the coffee waken your mind to the sunlight and the fresh breeze.